Grandma Julia (Julia Ann Moore James) kept some of her most-prized postcards within an album, or two. The prize in this case was not a recognition of monetary worth but rather of her most priceless possession–her family and close friends. The same was true for Aunt Etta, daughter to Julia. However, Aunt Etta’s albums seem to be twice as thick, a sign of her times as postcards grew in popularity.

In this blog, I shall present a selection of Christmas postcards that were sent to Grandma Julia, from one of her albums. Next week, or so, I will follow with a similar selection of Christmas postcards that belonged to Aunt Etta. Finally, just prior to the holiday, I shall post a selection from my grandmother, Gra Gra’s collection. These are my three leading ladies as outlined in my Blog Intro Intro to my blog.

Julia’s parents, George Martin Royal Van Buren Moore and Harriett (Daniels) Moore had eleven children: Clarissa, Harriett, Mary, Julia, Betsey, Florinda, Sarah, George, Ethan, Ellen, and Emma. In future blogs, I will do further exploration about them but make mention here, briefly, as a couple of the Christmas postcards shown below are from or about her siblings.

Grandma Julia was married to Charles Henry James and they had ten children: Harriett, William, Charles, Henrietta (Aunt Etta), Martin, Ethan, George, Charles, Byron and Frank. Again, I will explore them further in the future but wish to aid the reader when I reference the sender of the postcards that are posted below.

My featured postcard was sent by Aunt Etta and her husband William Hooper in 1909 to Grandma Julia, in Plainville, Mass. from Franklin, Mass. Here is the written side view: 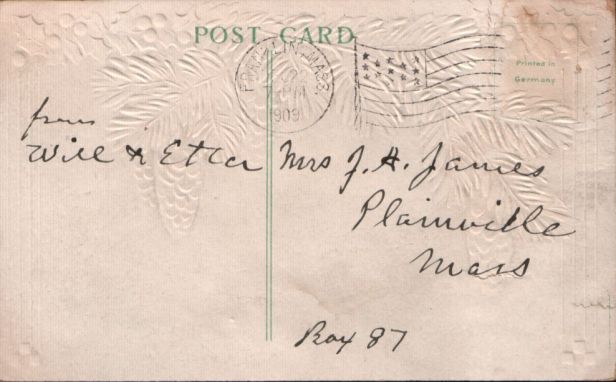 There is no indication of a publisher on the featured card, but it shows that it was printed in Germany. This card has an embossed technique which adds texture to the surface.

The next postcard, shown here, “A Merry Christmas” was sent by Bertha, my grandmother “Gra Gra” to her grandmother Julia.

It reads: “Dear Grandma, I wish you a very very very Happy Christmas Day. Bushels of love from your granddaughter, Bertha.”

Gra Gra was 17 years old at the time she sent this card.

This card was made in Germany and was postmarked in 1908, from Arctic (West Warwick), Rhode Island to Plainville, Mass.

This is one of only a few cards in this selection that is not embossed.

Shown below is the written side. 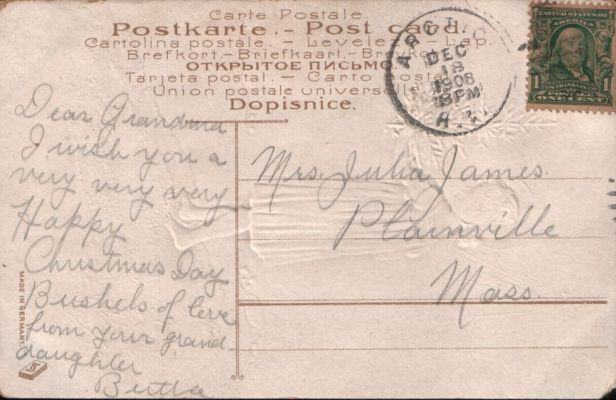 The next two postcards shown are embossed style and say on the front “A Merry Christmas”. Each card was sent or given to Julia by her sister Emma, on two different years. There is no postmark appearing on the cards so I am uncertain of the date. One card reads: “We wish you all a Merry Xmas. To Julia from sister Emma.” The second card reads: “With much love to all. From sister Emma, sister Julia.”

And here is the reverse side of these two cards: 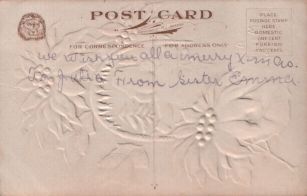 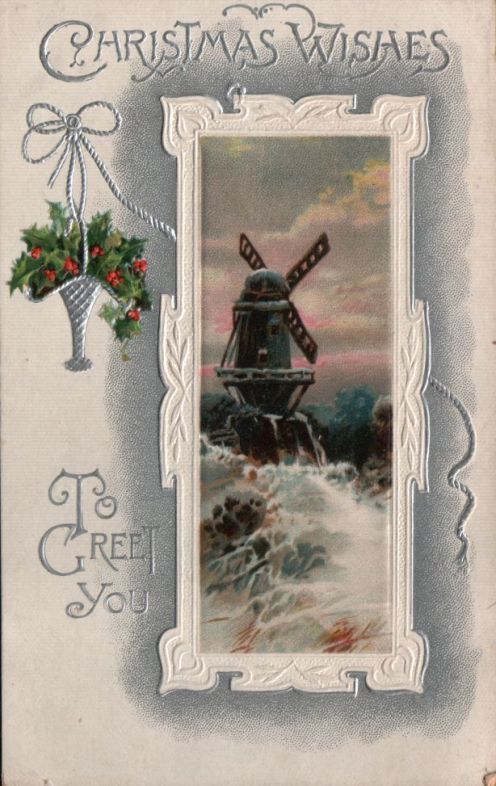 “Christmas Wishes, To Greet You” was sent to Grandma Julia by her sister Ellen.

The postmark on this postcard was from Westwood, Mass., sent to Julia at 69 King St., in Franklin, Mass. The year is not readable, but I think it is 1913 as that is the street address which matches another card sent from someone else in the same year.

The written side of this postcard reads: “Dear sister and brother (Julia’s brother Ethan) – A Merry Christmas to you both – Lovingly – sister Ellen.”

The publisher of the card was B.B. London, printed in Germany.

Below is the reverse side:

The next few images are actually from a regular folding-style Christmas card, not a postcard. It was found inside of Grandma Julia’s album along with the other postcards. 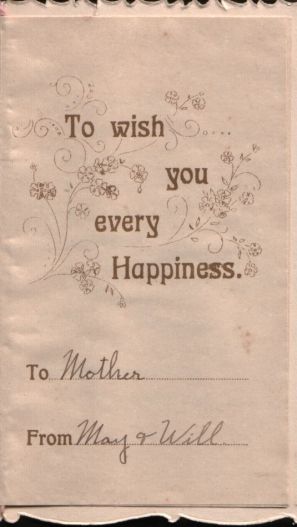 This card is just beautiful, very unique I would say. The front cover says “A Merry Christmas”. The next page is a signature page, with verse: “To wish you every Happiness” and is written to “Mother” from “May and Will”. This would be Julia’s son William and his wife Mabel “May” (Dollof) James. The following page of this card has a very nice verse on it: 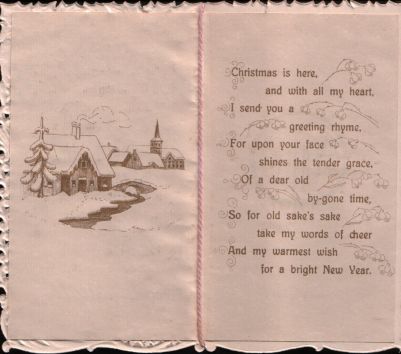 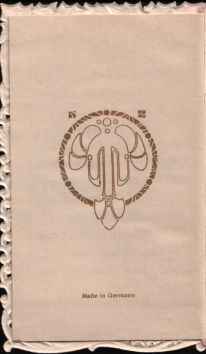 The verse inside reads as follows:

and with all my heart,

I send you a

For upon your face

Of a dear old

So for old sake’s sake

take my words of cheer

And my warmest wish

for a bright New Year.

The embossed postcard shown below “A Merry Christmas” with Santa driving the old car was published by H.I. Robbins, Boston and Copyright in 1907. The card was sent in 1908 to Grandma Julia, in Plainville, Mass., by Dewey, from Hyde Park, Mass. He was a son of William and May (Mabel). The written side reads: “Best wishes for a Merry Christmas and Happy New Year. Dear Grandma, from Dewey.” 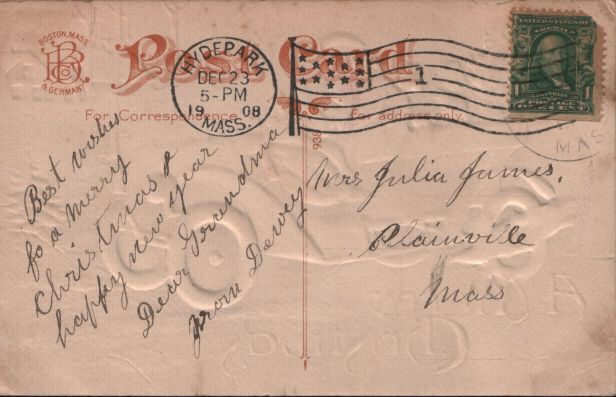 The next three postcards were sent from grandson Leroy James. To learn more about Leroy, please see my previous blog: A Thanksgiving Greeting from 1908! 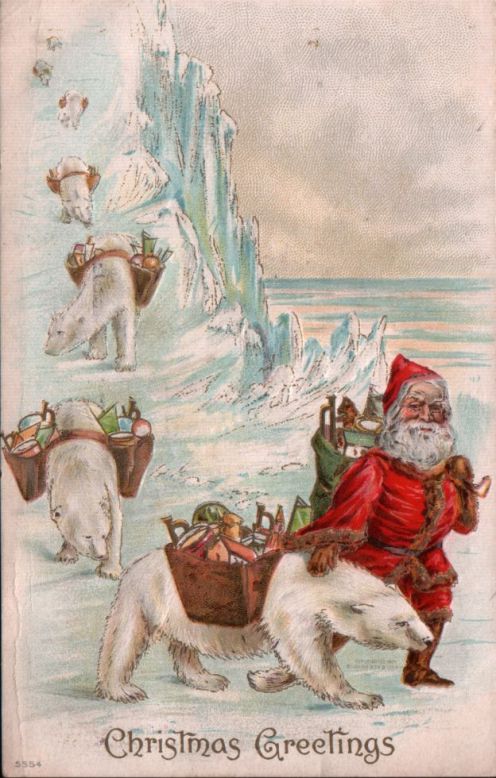 This embossed postcard, Santa walking with the polar bears, was postmarked in 1911 from Boston, Mass., and was sent to Julia in Franklin, Mass., in care of W.T. Hooper (Aunt Etta’s house).

It reads: “Hurry up Grandma. Santa Claus is waiting for you, put on your old gray bonnett. With love from your grandson Leroy James.

At the time he sent this card, Leroy was 14 years old.

Below is shown the reverse side with his written message. 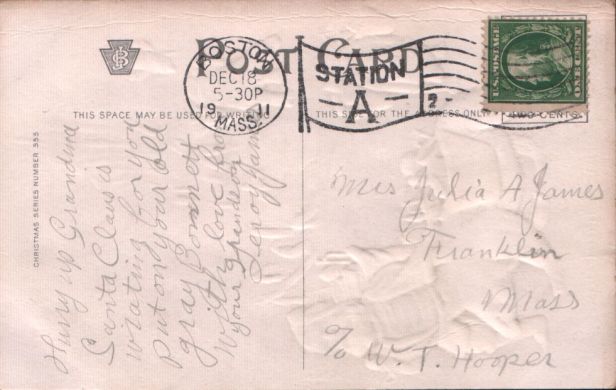 On the front of “A Merry Christmas” card, shown below, is a girl pulling a sled with a little “rider”. This card was postmarked in 1912 from Boston, Mass., and was sent to Julia, in Franklin, Mass. It reads: “Dear Grandma, I hope you will have a Merry Christmas and a Happy New Year and I hope you will get lots of presents from Santa Claus. From your loving grand child, Leroy James.” 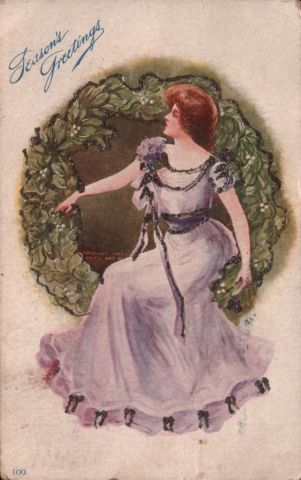 At the age of 16, in 1913, Leroy would send Grandma Julia a final Christmas postcard. On the front side of the card it says “Season’s Greetings” and shows a lady, in a lovely purple dress, sitting within a wreath. There is glitter attached to the front.

This card was published by the National Art Company and Copyright 1906. It was postmarked from Boston, Mass., and addressed to Julia at 69 King Street, in Franklin, Mass. It was via the message on this card, from Leroy, that I was able to learn that the “brother” referred to by sister Ellen on her postcard (shown earlier in this blog) was actually Julia’s brother Ethan.

This is the message written by Leroy in 1913: “Dear Grandma, We had a lovely Thanksgiving with Aunt Etta and Uncle Will but I was sorry you were not here but we will make up for it at Christmas time with love to Uncle Ethan and a big share for yourself. From your loving grandson, Leroy James.”

It is sad to think about, but both Leroy and Grandma Julia died within the next year, in 1914.

The following two postcards shown here below (just the front sides) are both embossed style. I believe they were sent to Julia from friends. The card shown on the right, has no postmark and reads: “With the Season’s Greetings. Mrs. Stewart.” The card on the left, is postmarked 1910 from Plainville, Mass. and it just has initials signed: “S.S.”

Finally, my last two postcards displayed below (again, just the front sides) have no writing, no postmarks but I thought they were nice cards to show. Both of these cards are embossed. The card, on the left, says on front “Bright be your Christmas” and was made in Germany. 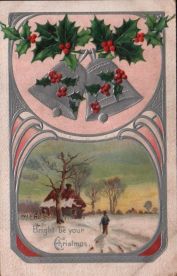 So, there you have it, a few select postcards from Christmas past, during the very early 1900’s, by way of Grandma Julia’s album.