Much to my surprise today, when I randomly picked my featured postcard, I learned that in less than two weeks demolition will begin on the historic Charlestown Bridge. It is also known as the North Washington Street Bridge located in Boston, Massachusetts.

This very rare steel, swing drawbridge (center pier) structure was built between 1898-1900 by the Boston Transit Commission. Their Chief Engineer was William Jackson (1848-1910) and it was constructed by the Pennsylvania Steel Company, of Steelton, PA.

Several years ago, I developed a greater appreciation for the various types of bridges that are constructed. One of my children had an extensive segment in school learning about bridge history with all the different types and specific designs so they could learn to recognize such differences–the assignments included projects such as detailed drawings. Before that point, I really had little realization of such wide differences in bridges. 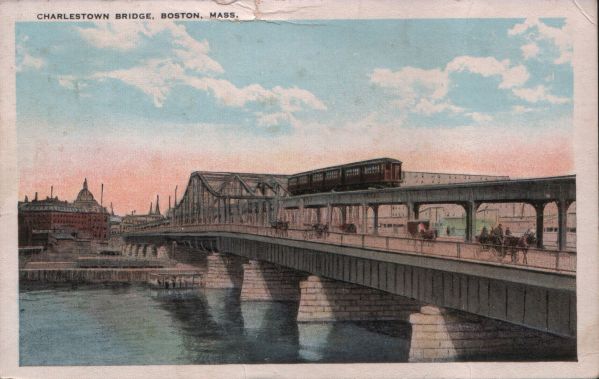 The Charlestown Bridge was 100-foot wide and about 1000-feet long. Being located on North Washington Street and going over the Charles River it connected the historic Boston neighborhoods of Charlestown and the North End.

This double-decked bridge was designed to carry the Charlestown Elevated Railway, as well as, vehicle traffic. There was an overhead structure built on the center lane of the bridge for the Elevated mainline tracks, with the lower deck for two 28-foot carriageways on either side of a 22-foot right-of-way for electric streetcars.

The draw span was about 240-foot in length and consisted of four pin-connected trusses. The turntable motors of this bridge were electrically operated and took about two minutes to open or close the span. The draw was last used in 1956 and was permanently closed in 1961.

The Elevated and surface tracks were eliminated on the bridge in 1975.

In August of 2018, construction began on a replacement bridge and is expected to continue until Spring of 2023.

A temporary bridge has been installed and will be used starting in less than a week, on July 17th, until the permanent one is ready. Sadly, demolition of the old historic bridge is set to begin on July 20th.

My actual featured postcard, with message shown below, was postmarked from Franklin, Mass., and was sent to Mrs. Henrietta J. Hooper (1861-1943), in Plainville, Mass. If you would like to learn more about Aunt Etta, please see my previous blog post: Intro to Aunt Etta And Her Great Adventures. 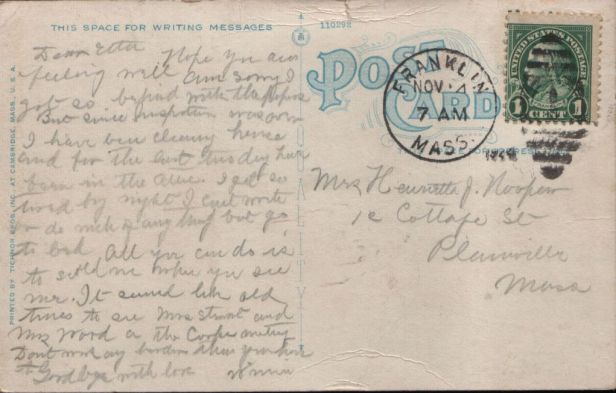 As best that I can make out, the message reads as follows:

Dear Etta, Hope you area feeling well. Am sorry I got so behind with the papers (?) but since inspection was over I have been cleaning house and for the last two days have been in the attic. I get so tired by night I can’t write or do much of anything but go to bed. All you can do is to scold me when you see me. It seemed like old times to see Mrs. Stewart and Mrs. Wood at the Corps meeting. Don’t work any harder than you have to. Goodbye with love, Winnie

One of the organizations that Aunt Etta belonged to was the Women’s Relief Corps (WRC), which was the Auxiliary to the Grand Army of the Republic (GAR). So, I am assuming that is the Corps meeting referred to by the postcard sender. There are other postcards in Aunt Etta’s collection signed by Mrs. Stewart so I recognize that name but I don’t recall seeing a Mrs. Wood at the moment.

This postcard was published by the Tichnor Brothers, Inc. (1908-1987), Cambridge, Mass. They published a wide variety of postcard types.

If you are new to my blog, my posting today is part of a series I call “One Postcard Saturdays” where I feature a postcard that usually has some type of landmark picture. In turn, I explore the landmark with a little research and try to give a few details about it.