On this Independence Day, the inspiration for this post has come via a booklet found within one of Grandma Julia’s postcard albums. This booklet was a souvenir of the journey from Philadelphia made by the Liberty Bell in 1903 to Bunker Hill, in Boston. If you would like to learn more about Grandma Julia, please read one of my previous postings, such as: Intro to Grandma Julia and the Bitgood’s Pine Knoll Laboratory.

My assumption is that Grandma Julia must have made the trek to Boston to see the Liberty Bell when it came to town.

My featured postcard is an embossed card, made in the U.S.A.. The actual publisher is unknown but it has printed on the reverse side “Patriotic Series No. 252”. The front side has a verse: “O may its stars forever shine So bright that all may see, To walk in Justice, Love and Truth And Glorious Liberty”.

The following image is of a Bunker Hill postcard of the Bunker Hill Monument, Charlestown, Mass. It was Sent to Gra Gra, postmarked from Boston, 1913. White border card published by New England News, Boston, Mass. If you would like to learn more about Gra Gra, please read one of my previous postings, such as: Intro to Gra Gra & Volunteering at Kent Hospital.

The Liberty Bell is a symbol of American Independence, it took on the symbol of Liberty during the 1830’s. It bears the message: “Proclaim Liberty Throughout All the Land Unto All the Inhabitants Thereof”. (Lev. XXV, V, X) 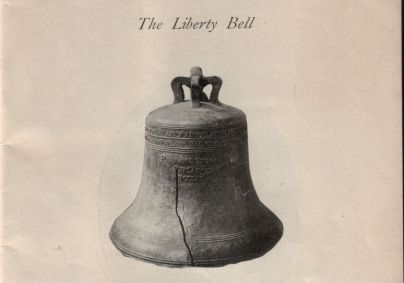 In 1751, there was a bell ordered from London which cracked upon the first test ring. It was melted down and recast into a new bell in 1753, weighing 2,080 pounds.

There was a narrow split that developed in the bell in the 1840’s which was followed by a repair effort in 1846. This repair job actually created the well-known wider crack. There was a second crack which then silenced the bell.

During the late 1800’s the bell began to travel across the country to serve as a display at expositions, fairs and such.

On June 17th, 1903, the Liberty Bell was displayed in Boston, on the occasion of the 128th Anniversary of the Battle of Bunker Hill.

The Battle of Bunker Hill took place on June 17, 1775, during the siege of Boston in the early stages of the American Revolutionary War. It is named after Bunker Hill in Charlestown, Mass.

On June 13th, the leaders of the colonial forces learned that the British were planning to send troops into Charlestown. In response, 1200 Colonial troops under the command of Col. William Prescott quickly occupied Bunker Hill on the north end of the peninsula (across Boston Harbor to the north) and Breed’s Hill closer to Boston. By the morning of the 16th, they had constructed a strong redoubt on Breed’s Hill. The next day, the British army under General William Howe, supported by Royal Navy warships, attacked the colonial defenses. The British troops moved up Breed’s Hill in perfect battle formations. One of the commanders of the improvised garrison, William Prescott, allegedly encouraged his men “not fire until you see the whites of their eyes.”

In the present day, the original Liberty Bell is located at the Independence National Historical Park, Philadelphia, in the Liberty Bell Center. There was a Centennial Bell made for the nation’s 100th Birthday in 1876, weighing 13,000 pounds, which still rings every hour in the tower of Independence Hall–each thousand pounds represent an original state.

The Liberty Bell Independence Hall Philadelphia; Souvenir on the Bell’s Journey to Boston, June 17th, 1903; Compliments of the City of Philadelphia; Compiled for distribution in connection with the One Hundred and Twenty-
eighth Anniversary of the Battle of Bunker Hill. Within above booklet: “The Liberty Bell” by Charles S. Keyser, 1901; Dunlap Printing Co., Philadelphia.